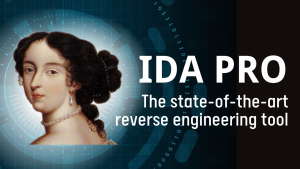 What is IDA Pro?

programming environment. Quite a mouthful, isn’t it? We are aware that the above speaks only to

geeks. The “raison d’être” of this small document is to clarify the nature and the purpose of IDA to

IDA Pro is a disassembler

to create maps of their execution. The real interest of a disassembler is that it shows the instructions that are

actually executed by the processor in a symbolic representation called assembly language. If the friendly

screen saver you have just installed is spying on your e-banking session or logging your e-mails, a

disassembler can reveal it. However, assembly language is hard to make sense of. That’s why advanced

techniques have been implemented into IDA Pro to make that code more readable, in some cases, quite close

to the original source code that produced the binary program. The map of the program’s code then be

post-processed for further investigations. Some people have used it as the root of a genomic classification of

IDA Pro is a debugger

But, in real life, things aren’t always simple. Hostile code usually does not cooperate with the

The debugger in IDA Pro complements the static analysis capabilities of the disassembler: by allowing to

single-step through the code being investigated, the debugger often bypasses the obfuscation and helps obtain

data that the more powerful static disassembler will be able to process in depth. IDA Pro can be used as a

local and as a remote debugger on various platforms, including the ubiquitous 80×86 (typically

windows/Linux) and the ARM platform (typically Windows CE PDAs) and other platforms. Remote

debuggers are very useful when one wants to safely dissect potentially harmful programs.

Some IDA debuggers can run the application in a virtual environment: this makes malware analysis even

Because no computer can currently beat the human brain when it comes to exploring the unknown,

IDA Pro is fully interactive. In sharp contrast with its predecessors, IDA always allows the human analyst to

override its decisions or to provide hints. Interactivity culminates in a built-in programming language and an

the language that can be used to automate simple to medium complexity tasks. For more advanced tasks, our

functionality. One could, for example, extend IDA Pro with a MP3 player and make malware sing. However,

we suspect our governmental customers are involved in more serious projects.

How is IDA Pro useful?

Given the speed and complexity of today’s hostile code, a powerful analysis solution is required. IDA Pro has become

“IDA Databases”. The 2001 “CODE RED” incident is typical of what usually happens in the background. When eEye isolated

a new worm whose payload targeted the White House’s web site, IDA Pro was used to analyse and understand it : it helped

the talented eEye analysts deliver a prompt and accurate warning of the impending attack. 24 hours a day, seven days a

IDA Pro is the ideal tool to investigate why software breaks. While the topic of vulnerability disclosure remains, more than

ever, controversial, one cannot ignore the fact that software is unfortunately often vulnerable to outside attacks. It is, without

any doubt, a bad idea to let vulnerabilities lurk in essential pieces of software: if they aren’t fixed, they could very well be

exploited by what we usually call “the bad guys”. The Wisconsin Safety Analyzer is a very interesting project investigating

A lot of software is now developed outside the country where it is used. Since programs are incredibly hard to verify, since

program really does what it claims to do.

Software is invading our lives at every level. In some cases, such as in what is known as the “Sony Rootkit” story, IDA Pro

IDA Pro has generated quite a lot of interest in academic circles. A partial list of papers where IDA Pro plays a role is visible

In 2001, IDA Pro was a finalist in the 18th PC Magazine Awards for Technical Excellence. It was a runner-up to Microsoft .NET

Who are IDA Pro users?

Virtually all anti-virus companies, most vulnerability research companies, many of the large software development

companies and, above everything else, three-letter agencies and military organizations. 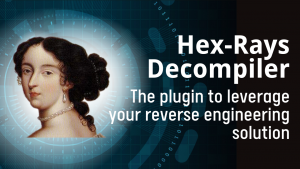 Advantages of the Decompiler

In comparison to low-level assembly language, high-level language representation in the Decompiler has several advantages:

concise: requires less time to read it; structured: program logic is more obvious; dynamic: variable names and types can be changed on the fly; familiar: no need to learn the assembly language; cool: the most advanced decompiler ever built!

The pseudocode text is generated on the fly. Our technology is fast enough to analyze 99% of functions within a couple of seconds.

Currently, the decompiler supports compiler-generated code for the x86, x64, ARM32, ARM64, and PowerPC processors. We plan to port it to other platforms in the future. The programmatic API allows our customers to improve the decompiler output. Vulnerability search, software validation, coverage analysis are the directions that immediately come to mind.

The decompiler runs on MS Windows, Linux, and Mac OS X. The GUI and text IDA versions are supported.

Together with the welcome of IDA Pro version 7.5, Hex-Rays launched its brand new product in May 2020: IDA Home. This newly released product is developed to make our top-notch software more accessible to professional reverse engineering hobbyists, students and the occasional private users.

Based on the same engine with Hex-Rays’ flagship product IDA Pro, IDA Home integrates a local or gdbserver debugger with powerful IDAPython scripting and enables analysis for both 32 and 64 bits applications while still can cover the most common processors (PC, ARM, M68k, MIPS and PPC). IDA Home can be purchased with a named license for an annual subscription of 365$ only.